NatGlycan would like to be your partner in developing your custom defined glycan microarrays or in producing your Tagged Glycan Libraries of glycans released from specific biological sources for  shotgun glycan microarrays.  We are currently developing defined arrays from hen’s eggs, free glycans in human milk, High Mannose and Pauci-Mannose Type N-glycans, mammalian brain, and a variety of Mucins.

Defined glycan microarrays are important tools developed by the glycomics community for analysis of glycan binding proteins and evaluation of the specificity of viral adhesins.  The glycan microarray developed by the Consortium for Functional Glycomics made important contributions to our understanding of the specificity and function of several classes of glycan binding proteins including the Bacterial Adhesins and Lectins, Viral capsid proteins and hemagglutinins, C-type Lectins, Galectins, Siglecs, Proteins that mediate Intracellular trafficking and other mammalian glycan binding proteins. NatGlycan can provide custom glycan arrays sourced from glycans in the NatGlycan growing library of purified natural glycans. 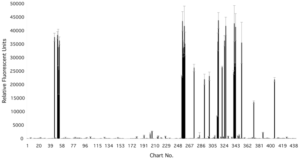 These data clearly confirm the specificity of SNA for Neu5Aca2-3Galb1-4GlcNAc since all of strongest binding glycans contain this trisaccharide determinant that is highlighted in blue in Table 1. The comparison of the structures of strongly bound and weakly bound or non-bound structures allows the definition of the “fine structure” of the interaction between SNA and mammalian glycans presented on the array. The quality of the information or the level of specificity that can be described is a function of the diversity of the glycans presented on a defined array.

The major limitation to defined glycan microarrays is the lack of glycan diversity. No currently defined glycan arrays are comprehensive.  A defined glycan array comprising all glycans within the human glycome would allow us to define the specificity of any biologically relevant GBP, but even the most comprehensive defined array (the CFG-defined glycan microarray with approximately 600 glycans) represents <10% of the number of glycan determinants estimated to comprise the human glycome.  One approach to overcome this limitation and create a more comprehensive array would be to chemically or chemo-enzymatically synthesize the estimated 10,000 determinants. Based on current technology, it is unrealistic to imagine that the structure of the human glycome can be determined or chemically synthesized in a reasonable time.

As an alternative, we developed “Shotgun Glycomics” to identify biologically relevant glycans by screening on glycan microarrays with GBPs of interest (Fig. 2).  We prepare tagged glycan libraries (TGL) and corresponding glycan microarrays for direct studies of both structure and function in terms of GBP recognition. The term “shotgun” differs from shotgun genomics in that it does not propose to sequence all of the glycans in the TGL, but to identify biologically relevant glycans for subsequent structural analyses and provide a guide for directing synthetic efforts. As structural definition of the TGL progresses, the number of defined structures on the SGM will increase, and ultimately the entire TGL can be defined, contributing to the human glycome database. 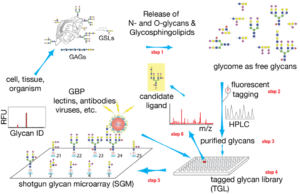 Fig. 2 Process for Preparing a Shotgun Glycan Microarray for Functional Glycomic Studies. Glycans can be from any biological source, making all of the resulting glycans natural products and biologically relevant. The glycans, representing the glycome of the biological source, must be tagged with a bifunctional fluorescent or uv absorbing tag so that they can be followed during purification and subsequently coupled to or absorbed onto a solid phase. The purified tagged glycans are stored as a Tagged Glycan Library (TGL). The TGL is printed as replicates of the individual glycans onto the reactive surface of a microscope slide. The glycan microarray is interrogated with biologically relevant GBP; i.e., lectins, antibodies, microorganisms, and the data are presented as a histogram of relative fluorescent units bound to glycans designated with their Glycan ID number. Glycans bound by GPB are retrieved from the TGL and chemically defined. The defined structures can then be retrieved from the library or manufactures synthetically for use in other biological assays to confirm function.